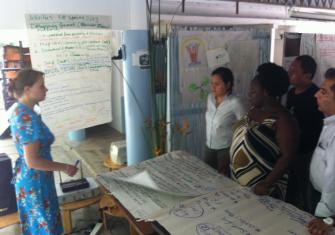 Including leaders in applying biodiversity supporting agricultural practices from 4 continents, as well as policy actors, researchers and other stakeholders, this gathering was held at the Wongsanit Ashram from 4- 8 July, 2012.   Earth Net Foundation was the local host and the Embassy of the Earth, led by Frank Heckman facilitated the event helping direct the group towards concrete goals and actions.

This was the second stop in a journey organized by the agrobiodiversity@knowledged network looking at how to mainstream biodiversity friendly agricultural practices, after a first meeting in Thika, Kenya last year .  Now in a world that is dominated by humans and where most arable land is being cultivated and all areas are human effected, to allow space for biodiversity only in our national parks and reserves are not enough.  Agriculture which is biodiversity dependent needs to also support and strengthen biodiversity.  Three key areas are identified where agriculture practices support biodiversity.  The first is in the type of agricultural management, particularly sustainable integrated organic practices that avoid use of toxic chemicals and support rich farm ecologies .  The second is the area of varietal conservation and development of seeds and breeds.  Farmer seed savers and farmer breeders, conserve traditional breeds and genetic material while also adapting it to new conditions and needs.  The third is how the farm relates to the greater ecological systems.  Thus farming communities that maintain community forests and other ecosystems such as wetlands, or incorporate habitat areas in their farms all are contributing to the greater ecological system and enviromental health beyond their own farm.

The meeting was very refreshing as most of the participants have a long experince working on the ground with small-scale farmer applying such biodiversity-friendly practices.  So the group was full of success stories and models.   The challenge set forth was how to move these practices and model from niches to widespread, even dominant.  With the process guidence of the facilitation team, within the core 3 days of meeting, a concrete action plan was developed to more forward.  While such moves forward never look easy, the plan developed did look feasible and possible.

The meeting concluded with an optional field visit, which most chose to join, to the Sanam Chaikhet Organic Farming Group in Chachoengsao Province, a farmer group in Green Net’s network.  Seeing the economic and group strength of these farmer women and visiting their farms that combine rice production with a diversity of vegetables and fruits, in fact now certifying 86 different varieties for organic sale, gave a tangible touch to the possibilities and benefits biodiversity-friendly agriculture can yield.  Returning to their homes in Africa, Asia, Europe, and Latin America, there was the feeling of inspiration and of being part of a community ready to take on this task.