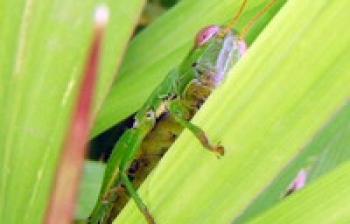 Wanakaset, a word which translates directly as “forest agriculture”, is both the name of a farm and of a network of farms and farmers in Thailand. But it also refers to a farming concept which goes beyond agricultural production to look at self-sufficiency and the relationship between man and his natural environment and resources.

Like many great ideas, Wanakaset was born out of necessity and reflection. Its founder, Pooyai Viboon Khemchalerm, grew up in Koh Khanun, in the province of Chachoengsao, Thailand, at a time when the village was surrounded by forests. After a logging concession, the area was opened to pioneers and the secondary forest was cleared and then cultivated.

Mr Viboon followed the advice being given at the time, clearing his land to grow sugar cane and cassava, using chemical fertilizers and other technologies. He was very successful at first, earning a good return and increasing the acreage he owned and farmed. His success got him elected as the village head – the reason why he still uses “Pooyai” as a title today.

However, this was not to last. As he came to have many acres of land, he also saw that each year his soil was producing less, and he was spending more on inputs, while the price of his crops stayed almost the same. He would receive huge amounts of money with each harvest, only to have to pay it out immediately and be stuck with more and more debt. Soon he had creditors after him and his land. At this point, about 25 years ago, that he decided to sell most of his land to pay off his debt. From having about 40 hectares, he was left with just under 2, but he was now debt-free. He realised that he had been following an idea of farming that was based on money, but that he needed to look at more than money. Only a few decades ago most Thai farmers had little money, but could find all they needed from their land and the forest for food, medicine, to make baskets, to build homes and to fuel their stoves.

Now completely broke, but without any debts, he decided to focus on harvesting and growing what he really needed. While living off harvesting wild greens, he started planting vegetables such as kangkong (Ipomoea aquatica). When this grew well, he found that after feeding his family and giving more away, he still had plenty left over. He took this to the market and returned with about 20 baht (or 50 euro cents). This was not a large amount, but still better than before. He had no bills or creditors to pay, so this small sum of money was his family’s to keep.

If a gap occurs in such a forest, as may happen after a fire or a windstorm, the open space will be colonised by pioneer species. Many of these first species are vegetables that we eat or their relatives. Gourds, chili peppers or passion fruit vines may all naturally occupy such a space. At the same time quick growing taller species will sprout. This can include a number of fruit trees such as wild banana and wild guava which have seeds that are easily dispersed by birds or squirrels. Leguminous trees also establish themselves rather quickly, particularly on poorer soils. Leucaena leucocephala is one species that quickly occupies open land in Thailand. In time, larger forest trees will also start to sprout in the area. The land shifts from being dominated by green herbs and ground covering vines, to being dominated by smaller fruit trees and leguminous trees, and then by larger forest trees. As the environment changes, some species will die off, yet other niches are also created.

In enabling this succession we use our knowledge of this process and help it along, while “directing” it by establishing the species we want to harvest. On open land we can plant a number of vegetables that perform optimally without shade, together with leguminous trees and smaller fruit trees like papaya, bananas or Sesbania grandiflora (which has edible flowers and shoots). We then establish larger trees. As the trees start growing higher and changing the general conditions (providing more shade and a cooler and moist environment) we shift our understory plants to ones that perform better in these conditions (such as ginger, edible ferns and pepper leaf). With increased shading and canopy we may want to add more shade tolerant tree species, such as some spices or ebony.

Wanakaset practitioners differ from most Thai farmers. While we also think that the production of rice is important, our main emphasis is on developing our farms into a food and medicine forest. Because Mr Viboon was already over 40 when he started this shift, he paid special attention to his own energy and labour. While annual vegetable crops meet our needs, they require regular labour. But there are many traditional perennial fruit and vegetable crops that continuously provide food but which do not require much physical effort after their establishment. In addition, some are extremely hardy, and are tolerant of floods and drought.

By paying attention to the existing biodiversity, to our own labour needs and constraints and also to an area’s natural succession patterns (see box), one can transform a piece of land into a bountiful food forest. Initially there will be a lot of sun and annuals will do best. At the same time one can start planting crops like bananas, papayas, Sesbania grandiflora, moringa trees or the “multivitamin plant” (Sauropus androgynus). These hardier plants are easily established and start to provide regular yields in one year or less. Trees that bear fruit well in forest conditions, such as jackfruit or coconut, can also be established.

Wanakaset ensures that we have enough to eat and enough production to meet our other needs, but farmers also need some sort of insurance. How can farmers get life insurance? We have found that the easy answer is to have good quality forest trees. In Thailand, as elsewhere, there is now a scarcity of fine wood, but in our conditions forest trees grow quite rapidly. A 20 year old rosewood, teak, mahogany tree, or of the Dipterocarpus species, like those on Pooyai Viboon’s property, is worth more than US$ 1,000.

Such forest trees are extremely hardy and easy to grow. Dipterocarpus trees generally grow high and have a small canopy so do not take much light away from the understory. One can plant trees for one’s old age or to pay for the children’s university education. One-sixth of a hectare can easily hold more than 100 forest trees, many fruit trees, perennial vegetables and herbs. The reality of a natural forest, as we apply it in Wanakaset, is that there are many layers that coexist: we identify up to seven layers, three levels of trees, ground covers, vines and creepers, epiphytes, and water plants. A mature Wanakaset plot reflects this diversity. These different levels provide food, medicines, fuel, building materials and household goods, while also insuring our future.

This layering approach to agriculture is not limited to food forests. Even in and around rice, a crop that needs a lot of sun, some trees with narrow canopies can be established without any loss in yields. Dipterocarpus species are a fine choice for this, especially because they are flood tolerant. Their deep roots recover nutrients and return them to the topsoil for the rice to use. (Sri Lankan traditional wisdom recognised these trees as rice “fertility managers”.) Organic farmers in northern Thailand grow pineapples, cabbages and other leafy greens under the canopy of mango and longan trees. Surprisingly, the leafy greens do better with partial shading in these farms.

Another farmer in Chachoengsao has found that the same is true with tomatoes. Some farmers point that the increases in heat and sunlight in recent years mean that many vegetables do not perform as well as they used to in open conditions. Integrated cropping seems to be a good way to adapt to climate change. Wanakaset can also be integrated into existing orchards and even rubber plantations, and more and more options are being found by innovative farmers. Pepper, passionfruit and yam vines can climb the tall trees. Ginger species do well in more shaded areas. Coconut, sugar palm, and areca nuts provide a lot of value without taking sunlight form other plants.

Like a natural forest, Wanakaset has a good ecological balance and an efficient nutrient recycling process. Once established, very little is needed in terms of external inputs or pest control. Having diverse yields greatly reduces the risk posed by fluctuations in the climate or market price. Production to meet one’s needs for food, medicine and other uses greatly reduces one’s expenses. Integrating forest trees provides an insurance plan to pay for expected and unexpected future needs.

Our network of farmers has shown that just a small step in this direction is enough to change a farmer’s situation from being increasingly in debt to having an increasing natural capital. This natural capital also provides an addition dividend in being a biodiversity reserve. Mr Viboon’s 2 hectares today look more like a virgin forest than any forest nearby, although only 30 years ago there were no trees there at all. His children and the many members of the Wanakaset network collect seeds and seedlings from this land for their nurseries, which are now recognised as amongst the best for forest and herb species in Thailand.