Learning about democracy from the bees 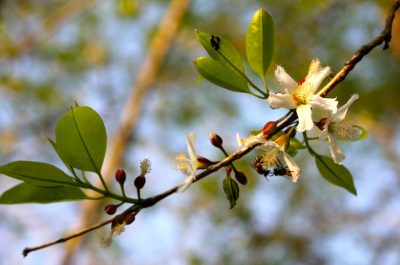 Thanks to a wonderful pair of Terrace Talk lectures at the Heinrich Böll Foundation office in Bangkok, I had the chance to learn much more about pollinators and native bees from Dr. Alyssa Stewart and Dr. Orawan Duanophakdee and the questions and discussion that followed.

One very interesting new bit of information shared by Dr. Orawan, was that bees practice democracy and how they do this. If we imagine at least thousands if not millions of years of this behavior, bees would have developed this means of decision-making far before humans. I therefore think there may be a deep wisdom in this that could be of value for us to consider, particular for those of us who are trying to develop more ideal and better functioning communities and societies or learn from well-functioning communities of our past and present. There are many criticisms of a democracy where one vote over 50% can win a decision, meaning that 49% may be not in agreement. However having tried to work with unanimous decisions as an alternative, this often does not seem to be the easiest or most functional. It can also mean that one vote against can stop a decision or initiative. So what do the bees have to say?

Dr. Orawan explained that the bees require a 75% agreement for a vote to pass. If there is less than 75%, the decision does not go forward. In addition, for decisions requiring a real knowledge of the situation, such as selection of a location for the colony to set up their new hive, only those who have knowledge of the situation, in this case those who have gone and looked at the different potential hive sites, vote. Those who remained with the colony taking care of other tasks do not vote on such a decision.

I don’t know yet of a human community or society that uses this apian form of democracy, but it does seem worth a try. As I understand if I were to use this in a human society or community, for general questions we would need a 75% majority or greater to pass. With less we would need to work to find a choice that has greater support and agreement from our members. Then when there is a decision that requires a real knowledge of a given situation, any member who takes the time and effort to understand the situation can vote, while those who do not have any knowledge cannot vote. Then again for those voting, a 75% majority or greater is needed to pass.

For this second aspect, I think it would allow us to share our respective authority with those who have a real knowledge and interest in the issue at hand, while giving each of us a more critical role in decisions that relate to our areas of knowledge and effort. However it does not seem to in any way exclude anyone from their right to vote. As long as one takes the time to understand the situation, then one’s vote is welcome and valued. I think this might help prevent votes being won by appealing just to the passion of the voters rather than relying upon informed decision.

My grandmother who was very active in the League of Women Voters, said many times that democracy is not a right but a responsibility, which requires the holders of this right not only to vote but to make a real effort to learn and inform themselves to make a good decision and use of their vote and other democratic rights. This aspect would align with the requirement the bees require of their own community members in their participatory democracy.