Policies on organic agriculture in Thailand 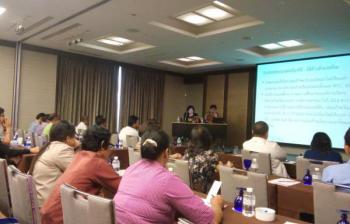 The National Economic and Social Development Plan, currently with the Eleventh Plan (2012 – 2016) is normally the reference point for the overall policy framework for all public policy issues. In this Eleventh Plan, the NESDB foresee an intense competition for land utilization between the productions of food and energy crops as it is harder if not impossible to expand more arable land. As a consequence, world food supplies will decline while their prices shoot up, leading possibly to world food crisis. To mitigate such impacts, the Thai agricultural sector is to be strengthened to “foster food and energy security with emphasis on management of natural resources, which are the basis for agriculture. Resources must be utilized sustainably to guarantee that agriculture will provide a strong base for production of food and energy. Measures will consist of encouraging efficiency and productivity in agriculture while the career and income security of farmers will be assured. Priority will be given to make food and energy security at the family, community and national levels be self-reliant and able to confront challenges with confidence. ” (NESDB 2011, 14).

The NESDB recognizes that organic agriculture can make several contributions to the country’s development goals, including providing food security at the household and community levels, being part of sustainable agriculture system following the King’s sufficiency economy philosophy, helping to shift the development paradigm and steer the country toward an environmentally sustainable, low-carbon economy and society (NESDB 2011).

Besides the NESDB guidance plan, there are many existing agriculture policies that provide both negative and positive policy environments for Thai organic agriculture. Many agriculture policies and measures still favor conventional farming. For instance, the imported farm agro-chemical inputs, including chemical fertilizers pay lower or non import taxes, the public agencies continues to purchase agro-chemical inputs for farmers participating in government-funded agricultural development project, and free pesticides are given out for free to farmers in the land where major pest outbreaks happen.

However, some government agencies (or some unit in the same agencies that promote conventional farming) would have a project and programme to promote the King’s sufficiency economy philosophy, which their promoted agricultural system are along the same principles of organic agriculture. The Royal Project has recently started an organic vegetable production programme, converting part of its vegetable production to certified organic farms. The organic vegetables are sold in several shops and supermarkets throughout the country.

Before 2006, the Thai government did not have any specific policies and programmes on organic agriculture. There were several piece-meal projects and programme which normally lasted for a year or a couple years. The first large-scale project was the Pilot Project on Sustainable Agriculture for Small-Scale Producers where the government approved a budget of US$ 15.8 million (633 million baht) for the support of the Sustainable Agriculture Foundation’s 3-year programe to strengthen and improve sustainable agriculture development of 3,500 families. Another notable project was the National Agenda’s Organic Agriculture, approved in October 2005. This was 5-year programme aimimg to support 4.25 million farmers to use organic input instead of agro-chemicals covering an areas of 13.6 million ha, reducing total import of agro-chemicals by 50% as well as boosting organic export by 100% annually.

A more comprehensive programme to promote organic agriculture and businesses began in 2007 with the appointment of the National Organic Development Strategic Committee, comprising of representatives from relevant government agencies and a few private sector and farmers. The Committee, with the secretary support from the National Economic and Social Development Board, was tasked to draft the National Organic Development Strategic Plan. Approved by the cabinet in early 2008, the First Strategic Plan (2008 – 2011) consists of 4 main development strategies, i.e. strengthening knowledges and innovations, development of traditional organic farming, development of commercial organic agriculture, and management and coordination to move forward the organic agriculture development. Once the First Strategic Plan was approved, a corresponding National Organic Development Action Plan was developed by the several agencies in the Ministry of Agriculture and Cooperative, Ministry of Industry, Ministry of Commerce, and the NESDB with a plan to spend 4,826.80 million baht (USD 145.56 million) on 104 projects in the next 4 years. This Action Plan was also shortly approved by the cabinet.

There are also concerns about the effectiveness of the projects implemented by the government agencies under the First National Organic Development Action Plan. For instance, the study by Green Net (Panyakul 2013a) reviewing the total of 1.75 million farmers trained by government agencies under the Plan (or approximate 34% of farming families in Thailand) and the report by the Land Development Department showing that 2.55 million farmers had been trained about the use of organic fertilizers to replace chemical fertilizers but the statics shows that the import of chemical fertilizers continues to increase from 5.172 million tons in 2010 to 5.579 and 5.583 million tons in 2011 and 2012.