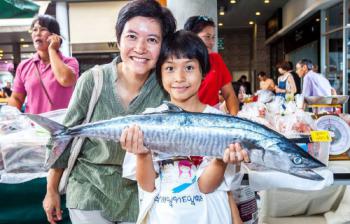 I would not be surprised if you answered yes to at least one of these questions because fishing has become a very sensitive issue within the last decades. Fish is a very important product in Thailand, especially for domestic consumption. Meanwhile, the Thai fishing industry and its fishing resources are facing many crises. Widespread problems include overfishing, destructive and illegal fishing practices even including slavery on fishing boats and mega projects along the coastline, implemented in the framework of the National Economic and Social Development Plans. Although these projects may contribute to economic growth they damage coastal resources and often destroy the livelihoods of many local fishermen at the same time. But Thai politics regarding fisheries are manifold as there is also a Master Plan of Marine Fisheries Management of Thailand set up by the Fisheries Department. This Master Plan promotes community based fisheries management with the goal of achieving at least 10% of community managed coastal fisheries until 2018.

With a similar idea in mind, Green Net started a project in the beginning of 2013 with the objective of supporting small-scale fishermen who fish in local areas and use selective fishing gear. So far, the project works with fishermen from four different locations in the south of Thailand: Petchaburi, Prachuab Khiri Khan, Phang Nga Bay and Songkla Lake. Three other organizations, the Healthy Public Policy Foundation, the Association of Thai Fisherfolk Federation and the Thai Sea Watch Association are partners of the project. The key role of Green Net is to open up a market for this fish in Bangkok and to link the small-scale fishermen to the consumers. Through this direct link, consumers can trace back the origin of their fish and learn more about its treatment within the very short and transparent supply chain. This linking can then help power changes on a wider level to protect coastal resources, promote sustainable practices and strengthen fisherfolk communities.

Dr. Supaporn Anuchiracheeva (abbr.: Dr. Nuch) is the project manager from Earthnet Foundation (GreenNet). She has received her PhD in coastal and marine fisheries management. Within the past nine months, since the beginning of the project, she experienced great success with the sale of the fish in Bangkok but also some obstacles, particularly with the logistics or the management of demand and supply. According to her, the main reasons for consumers to buy fish from the project are as follows:

1. The fresh fish is not chemically treated. This actually is exceptional to some extent as it has become common practice to treat fish that is sold in the big cities with a formaldehyde solution. This chemical helps to make the seafood look fresh. However, as a serious side effect it can cause health problems and even death in extreme cases. In contrast to this, the fish from the GreenNet artisanal fisheries project is caught just shortly before transport, packed on ice and arrives in Bangkok after one night on the bus. It is sold, no later than two days after its catch.

(Crab bank used to keep female crabs until they release their eggs. Eggs are then put back in the sea)

3. The fishing is based on respect of the environment including actions for the preservation of coastal and marine resources. For example, fisherfolk are using larger net-mesh sizes and releasing juvenile fish back into the sea whenever possible.

Within the project, the fisherfolk also get expertise on how to sell their products for a better price. For the group of fishers in Petchaburi, key advice was to do sizing and sorting of fish after the catch. Like this they can sell fish of large size for a better price at the market. Another idea is, to raise the market value of the product by processing. For some fish, the market price is extremely low due to the large supply. One of these fish is sardines from Prachuab Khiri Khan. The price for one kilogram of fresh sardines is only 6 Baht (0.15€). For sweetened or salted fish, the price is as high as 60 Baht for 200 g. One difficulty of processing is that all ingredients have to be organic. But as far as only salt and sweetener (e.g. sugar) is used this problem is negligible. At the beginning the fishermen were struggling to produce the processed fish with a consistent taste. Working with different amounts of ingredients they arrived at a good recipe and succeeded with the learning process.

In the case of shrimp, the main reason behind the sale of dry shrimp is the high amount available during the peak season from September-November. It is very difficult to sell a very big amount of fresh shrimp within a short time, so the drying of excess shrimp is a good solution.

Fish from Wild Catch or Aquaculture

Can the consumption of wild caught fish be sustainable in any case? The world has passed “Peak Fish” in 1996, meaning since then fish products from wild catch have been declining despite greater fishing efforts. For Thailand, FAO statistics report a similar decline since 2009. But Thailand’s economy and people heavily depend on the fishing industry for export and nutrition. Within the last years, Thailand has become the world’s largest exporter for shrimp. 70% of these shrimp are coming from aquaculture just as one quarter of the country’s overall fish products. Aquaculture has also been promoted by the government to give the overfished fish stocks a chance to recover. But isn’t the focus on intensified aquaculture just a jump from the frying pan into the fire? Ponds for aquaculture are directly competing for space with natural marine habitat. Hormones, antibiotics and other pharmaceutics are used to keep the raised fish healthy but they are also likely to leach into the natural waters. Furthermore, less valuable fish from wild catch are often used to feed the farmed fish and thus contribute to a further decrease of the wild fish stocks. Until 2009 no organic shrimp or other indigenous fish from aquaculture was available on the Asian market. Since then, some organic aquaculture farms (especially for shrimp) have developed in Thailand but they are mainly targeting the export market as the price for the organic products is very high. For the consumer, the question remains which fish to choose and which one is most healthy for him and least impacting the environment. Dr. Nuch from the Green Net fisheries project assumes that most Thai consumers would value fish from wild catch more as it has a higher quality reputation.

esides the market opportunities in Bangkok, the project on organic artisanal fisheries also helps the fishermen to establish their products within the local market. One instrument to achieve this is a grant given to the fisher group. They can decide together about its implementation. For example the group in Petchaburi plans to open a local shop with this grant. Furthermore, the fisherfolk are also included in the main decision processes. They can introduce their ideas and needs when it comes to decisions e.g. about the market price of the fish.

The Artisan Fishery project is a promising venture that will most likely be profitable in the future and benefit fishermen as well as consumers. Despite its successful start, some problems also complicate the management of the project. The original idea was to include 50 000 households of fishermen and thus about 250 000 people. But until now, the number of active fishermen in the project is not very big. This is due to some problems in the fishing communities, e.g. some fishermen are in debt with their middlemen and are therefore not free to join the project, others have changed their business (e.g. to tourism). This happened in Pang Nga province with the Network of Fishery Central Markets that was successfully run for a few years but fell apart because of difficulties in marketing and limited connections to outside markets. Not only can the number of active fishermen be a restriction to the growth of the project. The management team of Earthnet Foundation is very busy with handling the demand and supply to assure a large amount of fish really reaches a good amount of consumers. If more fishermen will join the project, the market will also need to be expanded but to manage this more man power will be required. So far there have already been some inquiries from restaurants and hospitals which would like to have this seafood on their menu. Dr. Nuch is also thinking about opening a small shop. For now though, it is still unsure if and how these ideas will be implemented.

… then you now know about a real case where all those aspects are taken into account. The continuing success of the project may only be limited by the fact that it is just not that easy to overcome all the dependencies, conventional ways of thinking and organizational challenges. In this case, a few people are working to make a change for many people. The future may show how big this impact can be, but one thing is for sure: You can make a change by being a fisherman’s friend.